The Best Integrated Marketing Campaigns, According to HubSpot Marketers

Integrated marketing is any marketing campaign that uses multiple channels in execution. For example, you might see a popular new donut flavor in a commercial, then drive past the donut shop to see posters of the donut. And if you flip through Instagram once you get to your destination, you might see a GIF on your feed, displaying the donut.

This style of marketing is great for boosting leads and brand awareness. Using multiple sources to deliver the same campaign diversifies the audience that interacts with its content. In this post, let’s look at some recent integrated marketing campaigns that delivered a great experience for customers and leads alike.

A great example of an integrated marketing campaign comes from the 2021 Hyundai Elantra award-winning campaign.

To increase brand awareness among the younger, millennial demographic, Hyundai partnered with Spotify and musicians in LA, Miami, and NYC to give customers an insider’s guide of the city.

The city guides were made available to audiences everywhere through Spotify podcasts, where drivers could follow along from place to place by listening to the podcast.

These guides were audio, video, and even a microsite that housed itineraries and stop descriptions.

As an associate marketing manager at HubSpot, I think this is a great campaign that utilizes the right channels for the audience that Hyundai is trying to reach.

In 2020, McKinney and Picturehouse teamed up to launch a new film, Fatima, the historical drama of the Virgin Mary’s appearances to three children in Fátima, Portugal, over a hundred years ago.

The companies developed social content to inspire, connect and elevate the film’s key themes. It was a social campaign that included more than 200 pieces of content reaching 14 million people.

But one month before the movie’s release, the world and Fatima were put on pause due to COVID-19. To keep people interested and engagement up for another four months, the companies created “Together In Spirit,” a virtual pilgrimage transporting people to the Shrine at Fátima. The campaign videos got more than 27 million views.

At a time when everyone was isolated, the goal of the broadcast was to provide a message of hope, and in the process, it became the best-performing Facebook Premiere event in motion picture history.

One of my favorite integrated marketing campaigns to come along is the launch of Hulu’s HAHA Awards. HAHA is a clever acronym, standing for “Hilarious Animated Hulu Awards,” which I love.

Initially, I saw the commercial during a regular ad break while watching — of course — Hulu:

Because there’s no awards show for animated content, the team at Hulu decided to change that — and get fans involved. Fans can vote for the awards on Twitter and Hulu’s website.

I appreciate that anyone with a Twitter account can participate in voting, regardless of if they are Hulu customers. Some of the categories are popular TV shows, like Archer and Bob Burgers, so the masses can vote. Additionally, people without a Twitter or Hulu account can vote, just by visiting the website.

The tactic of using YouTube to introduce the campaign, as well as alternate methods of voting, makes this campaign a chance for Hulu to delight customers and earn more quality leads from social media.

For the single, “Experience,” R&B singers Victoria Monet and Khalid collaborated with Spotify for a release campaign. The campaign included online and in-person marketing tactics and is the favorite campaign of HubSpot staff writer Jay Fuchs.

In Canada, there was a billboard put up in Toronto, promoting the song’s Spotify release. In response, Monet posted a picture on Instagram to share with her fans and promote the single:

The use of online and in-person marketing methods makes this integrated campaign one that can be seen from anywhere. From the billboard in Canada to international Facebook and Instagram fans, the release of “Experience” was anticipated globally. In fact, in one month, the single became Monet’s most popular song on the streaming service.

“In 2019, Gillette launched its campaign, ‘The Best Men Can Be’. The campaign included an inspiring video, a landing page that celebrates male advocates and leaders in the community, and a hashtag, #thebestmencanbe, to encourage user participation across social channels,” says HubSpot Marketing Manager, Caroline Forsey.

“The campaign, created in response to the #metoo movement, urged men to hold themselves to a higher standard,” says Forsey. In the corresponding ad for the movement, viewers are shown hypothetical real-life instances of men stepping in to be themselves, and making positive change in their community. To heighten awareness of the movement, the landing page highlights real accounts of men upholding the hashtag Gillette created.

“While the campaign received some backlash from both stakeholders and consumers, I think it was worth the price because it redefined the shaving brand as a relevant, values-oriented brand. For me personally, I shared the ad with all my male friends and family members, and it sparked a discussion — which, really, is what marketing is all about,” Forsey commented.

Gillette’s tactic of getting their customers involved proved to be successful in the moment and long-term. Discussions, like the one Forsey had with men in her life, were happening nationwide. In fact, my university class had one about the campaign. This integrated campaign, boosted by real accounts, was proven to be not only successful but valuable.

Outdoor activity is at the core of REI’s products. REI sells camping essentials, such as tents, clothes, and insulated containers. In 2020, REI partnered with several groups in Washington state that aim to preserve wildlife and nature, making it the favorite campaign of HubSpot marketing manager, Clint Fontanella.

Outdoor Alliance, The Outdoor Industry Association, and national parks came together for the #RecreateResponsibly campaign. The point of which was to educate the public about how to stay safe when venturing outdoors, with the main content player being graphics similar to the one below: 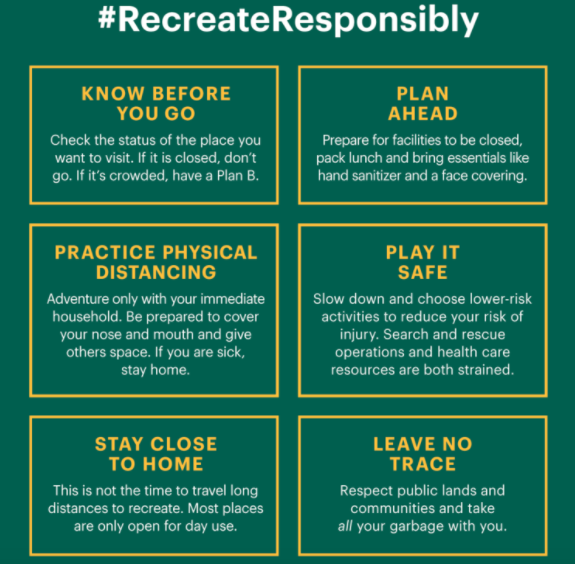 This graphic was shared on social media to spread awareness of tips to responsibly venture outdoors to avoid health concerns. #RecreateResponsibly‘s hashtag asks followers to share the tips in real-life situations, shared by REI’s Instagram.

With the hashtag and partnerships, the campaign is also boosted by related blog posts on REI’s website. Posts like this one offer ways to stay safe while traveling.

The hashtag has been used by The National Park Service, Colorado Parks and Wildlife, and Los Angeles National Forest, and brings awareness to large audiences. The partnerships and REI’s content share an educational message and an interactive component — making this campaign diverse and engaging.

“She’s in Parties” is the name of an eyeshadow palette from Melt Cosmetics. Says staff writer Rebecca Riserbato, “The purple palette sparked a hashtag of the same name on Instagram. On the landing page for the collection, there’s a section dedicated to Instagram posts with the hashtag.”

The campaign inspired a purple theme, which took over the company’s Facebook and Instagram accounts. Along with this social media content, influencers who were sent the palette began to upload their reviews on YouTube.

For this launch, a variety of social tactics were used. A matching social campaign, user-generated hashtag, YouTube recommendations, and a revolving landing page were all contributions to where the campaign was distributed. When you know where your audience spends their time, like the team at Melt, you can reach them with a diverse, omnichannel strategy.

“Along with the limited-edition wrapping, the company created a dedicated landing page for #LoveWins, and supported Pride Month with the #LoveWins hashtag across its social channels.”

Forsey continues, “Ultimately, I chose this campaign as one of my favorite integrated campaigns of 2020 because I was inspired to see this brand uplift and inspire communities while giving proceeds back to an incredibly worthy cause.”

The brand chose a social movement that was important to them, Pride, and celebrated it with this integrated campaign. This tactic brings awareness to a social cause, a respected organization, and enhances a celebration.

In early 2018, the newspaper The New York Times was struggling. With dwindling subscriptions and dwindling trust in the news from the general public, the team behind the famous publication had to figure out how to build widespread trust.

That’s where “The Truth Is Hard” came in — it was a campaign designed to offer transparency. “I think the best advertising not only gets you to pause and pay attention at the moment but also encourages the viewer to take action and learn more after the fact,” says Alicia Collins, senior brand manager.

“The New York Times’ ‘The Truth Is Hard’ campaign does that. It tells a clear and impactful story, and demonstrates the value and importance of journalism right away.”

Following a tribute to journalism at the 2018 Oscars, the campaign began. The Times aired a minimalist film to display the clarity of newsprint, and challenged viewers to think about what truth means to them.

Refugee crises, sickness, and wars — the second phase dove deep into conveying what journalists endure in order to deliver the most accurate coverage. And, with a paid media campaign on Facebook, Twitter, and Instagram, all of this content was broadcast for the world to see. 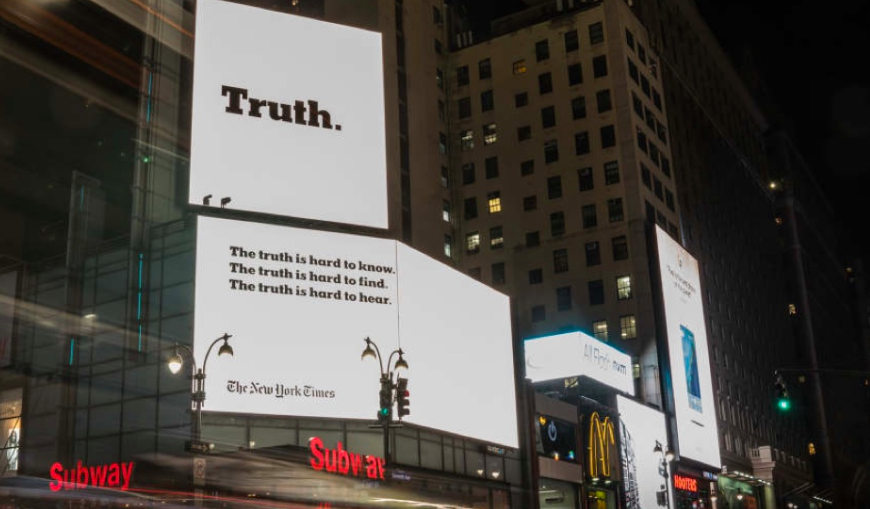 This campaign earned the Times their highest number of new subscriptions since the paywall started, increasing signups by 100%. The multiple channels used by the news source to restore their image to the public worked and made this integrated campaign a win.

Get Started With Integrated Marketing Campaigns

And the only way to truly create an integrated marketing campaign is to have a marketing plan template to help you identify the right channels, budget, and strategy for your campaign.

Every time I talk to a business owner the tell me the same thing, “I …