How to Use Porter’s Five Forces to Outmaneuver Your Competition

Porter’s Five Forces is a model that identifies and describes the five economic forces that shape every industry. More specifically, it explains how these forces dictate every industry’s competitive intensity, potential for profitability, and attractiveness.

Porter’s Five Forces has become a fundamental model that most businesses use to grasp the dynamics of their industry and, in turn, drive their business strategy. And it can help you do the same, too.

To help illustrate this, we’ve fleshed out the five fundamental economic forces at play in every market and provided an example analysis in each section, so you can see how each of these forces might play out in your specific industry.

What are Porter’s Five Forces?

The way you apply this model to your own business is totally dependent on the nature of your industry. Once you understand the forces affecting your industry, you can better extract insights that are relevant to your business.

Let’s break down each economic force and look at a few examples:

1. Competition in the Industry

Competition plays a huge role in your industry’s profitability — the potential to produce a high return on investment — and, in turn, its ability to attract new entrants.

If there’s a lot of competition in your industry, it’s harder to turn a profit. Customers have a rich pool of options to choose from, so if your prices are too high, they can strike a deal with a supplier who will sell to them at a lower price.

In other words, customers typically wield more power than suppliers in competitive industries. This usually leads to suppliers undercutting each other until their revenue barely exceeds their costs — which, in turn, plummets their profits and discourages new players from entering the market. 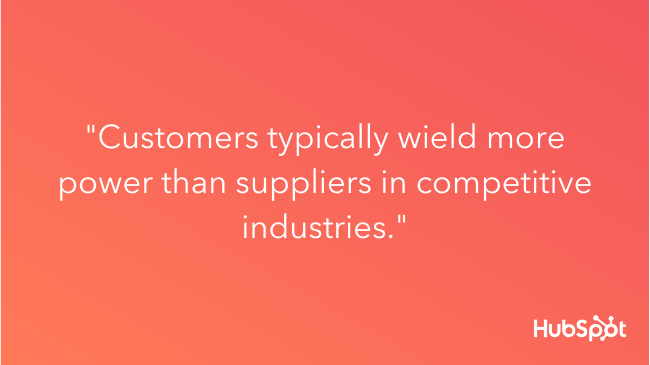 If there’s less competition in your industry, it’s easier to turn a profit. Customers have fewer suppliers to choose from, so if they want to buy your market’s product or service, they must accept the higher price.

To help you examine the competition in your own industry, let’s see it in action in the aluminum baseball bat industry.

From little league to college, baseball players all around the country primarily use aluminum baseball bats to train and compete.

Louisville Slugger, Rawlings, Marucci, DeMarini, and AxeBat are the leaders in the high-end of this market. Their target customers are travel or college baseball players who are willing to pay a premium price for the best bats that can perform at a high level and stay durable for multiple seasons.

Easton, Mizuno, and Adidas serve the middle of the market, and Anderson, Combat, and Dirty South serve the low-end of the market. Their target customers are less competitive players who probably just play baseball for fun and friendships.

2. Potential of New Entrants into the Industry

If new players can enter your market quickly and cheaply, they can sell their minimum viable product. This is a product with just enough features to satisfy early customers. 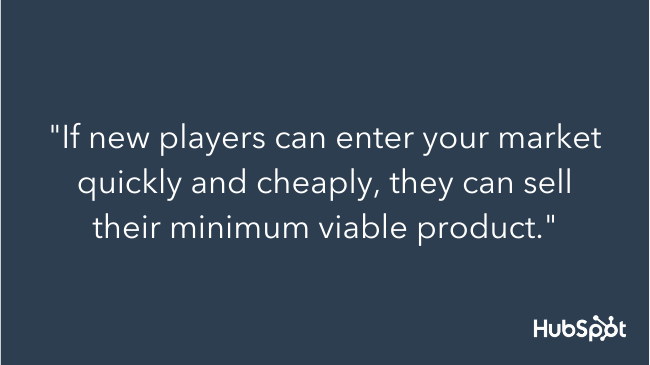 The frequency of new players entering your market hinges on your industry’s barriers to entry. If it costs a lot of money and time to build a viable product and cover overhead expenses, startups wouldn’t be able to enter or compete in your market.

The barriers to entry of the aluminum baseball bat industry are very high. You would have to spend a lot of money on research and development to figure out how to differentiate your product in a saturated market, purchase a bunch of raw materials to manufacture the bats, and build expensive facilities and machines to actually produce them.

This startup would have to charge close to an industry-average price to cover the initial overhead of creating a minimum viable product, crafting an enjoyable brand experience, and generating revenue. You would also need to hire a product, marketing, and sales team to run this startup’s daily business operations.

The number of suppliers or competitors in your market directly affects your company’s ability to control prices. When there’s little to no competition, suppliers hold the pricing power. If a consumer doesn’t accept your prices, you and your fellow suppliers can easily find someone else who will. 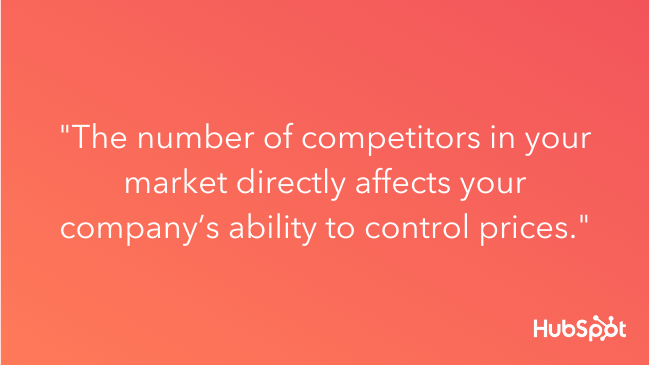 When there are a lot of suppliers in your industry, each supplier holds less pricing power. Your market’s customers have a rich pool of options to choose from, so if your prices are too high, they can just strike a deal with another supplier.

With 11 major suppliers in a massively popular industry — and five or less brands competing in each segment of the market — the suppliers hold a lot of pricing power. Almost every baseball player, from little league to college, needs an aluminum baseball bat to train and compete, so they’re very dependent on these suppliers, which gives them even more pricing power. 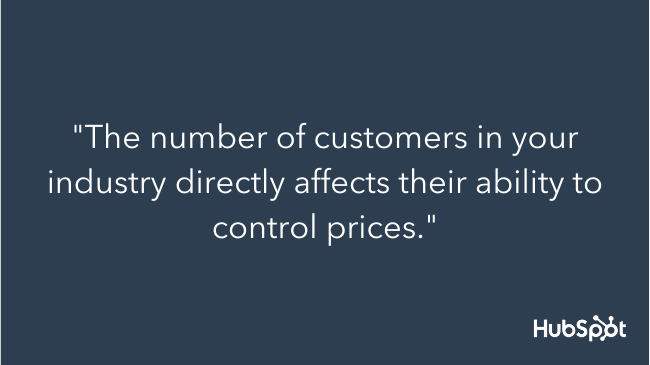 Since suppliers depend on customers to generate revenue, suppliers must adhere to their customers’ pricing demands — or risk customers doing business with other suppliers.

On the flip side, if there are a ton of customers in your industry, the customers hold significantly less power. They must accept the prices suppliers set or else they won’t be able to buy any of the products or services.

Every single baseball player needs an aluminum baseball to train and compete, so each supplier in the aluminum baseball bat industry has a huge potential customer base to market and sell to. Since there are few suppliers and so many customers in this market, the customers don’t hold enough power to drive the prices down.

Substitutes are products from different industries that consumers can use interchangeably, like coffee and tea, and they can significantly shape your industry.

If your product doesn’t have cheaper or superior substitutes, though, the businesses who produce these substitutes don’t pose as much of a threat to you or your direct competitors. This low multi-market competition might only drop your prices and profits slightly.

Instead of buying aluminum baseball bats, players could buy bats from suppliers who only manufacture wood bats, like Baum Bats, Old Hickory, and Sam Bat. But the odds of this happening are extremely low. Even though individual wood bats cost less than individual aluminum bats, wood bats break much more frequently.

For instance, one $250 aluminum bat can last longer than five $100 wood bats, so replacing aluminum bats with wood bats would actually cost more money. Players can also hit the ball farther with aluminum bats, which makes it the superior product.

Additionally, wood bat manufacturers make the most money by focusing on a specific market of baseball players who only use wood bats, like professional baseball players, summer college league players, and top-flight travel baseball players. In sum, there’s a low threat of substitutes in this industry.

To conduct a Five Forces analysis, start by reflecting on how each force affects your business. Then, identify the strength and direction of each force — which also assesses your competitive position.

To get the ball rolling, ask yourself these questions:

Next, write down each of the five forces, and note the size and scale of each, using your answers to guide you. You can also do this by downloading our Five Forces Model Template below. 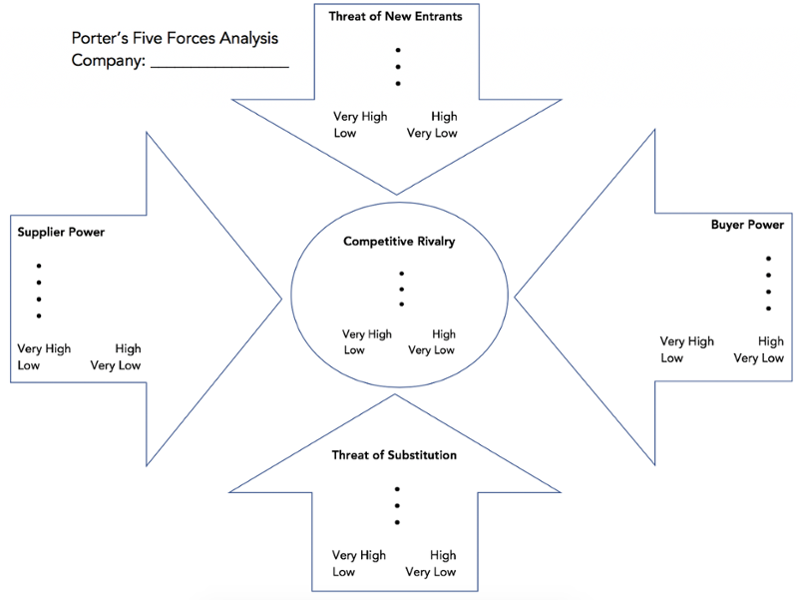 Competition is a natural part of business. Analyzing your industry using Porter’s Five Forces can help you identify strategies to improve your competitive position, potential for long-term profitability, and overall attractiveness.