In part two of two, we’ll explore different ways to create styleguides and what works and doesn’t about each method. Throughout, we’ll look at examples. If you haven’t read the first part of this series from last month, or need a refresher, click here.

We have already defined what a styleguide is, and what types of visual definitions need to be in them – and I’ve made recommendations about when to create them. This post will dive into the different ways of actually creating the styleguide.

I’m calling this the Static Old School method: A designer or production artist lays out a styleguide based on the design system for the project in Illustrator or Photoshop. They export it as a PDF, get client approval, and move on to layout. The PDF is handed off to the developers to begin their baseline work.

On a small project or one with a short timeline, this approach will suffice. There are enough “cons” to avoid it if you can though.

Method Two: Use a Plugin!

Since a designer has her layout in a design program like Photoshop or Sketch already, wouldn’t it be really convenient if a magic button could be pressed and a styleguide is automatically created? Fear not, this magic button exists.

The most well-known style guide generator is Craft by Invision. Invision is an online collaborative prototyping tool that allows designers to upload their layouts, request reviews or comments from other team members or clients, and simulate interaction by creating clickable hotspots.

If a layout is uploaded correctly, developers can interact directly with the app to inspect fonts, measurements, and CSS properties: 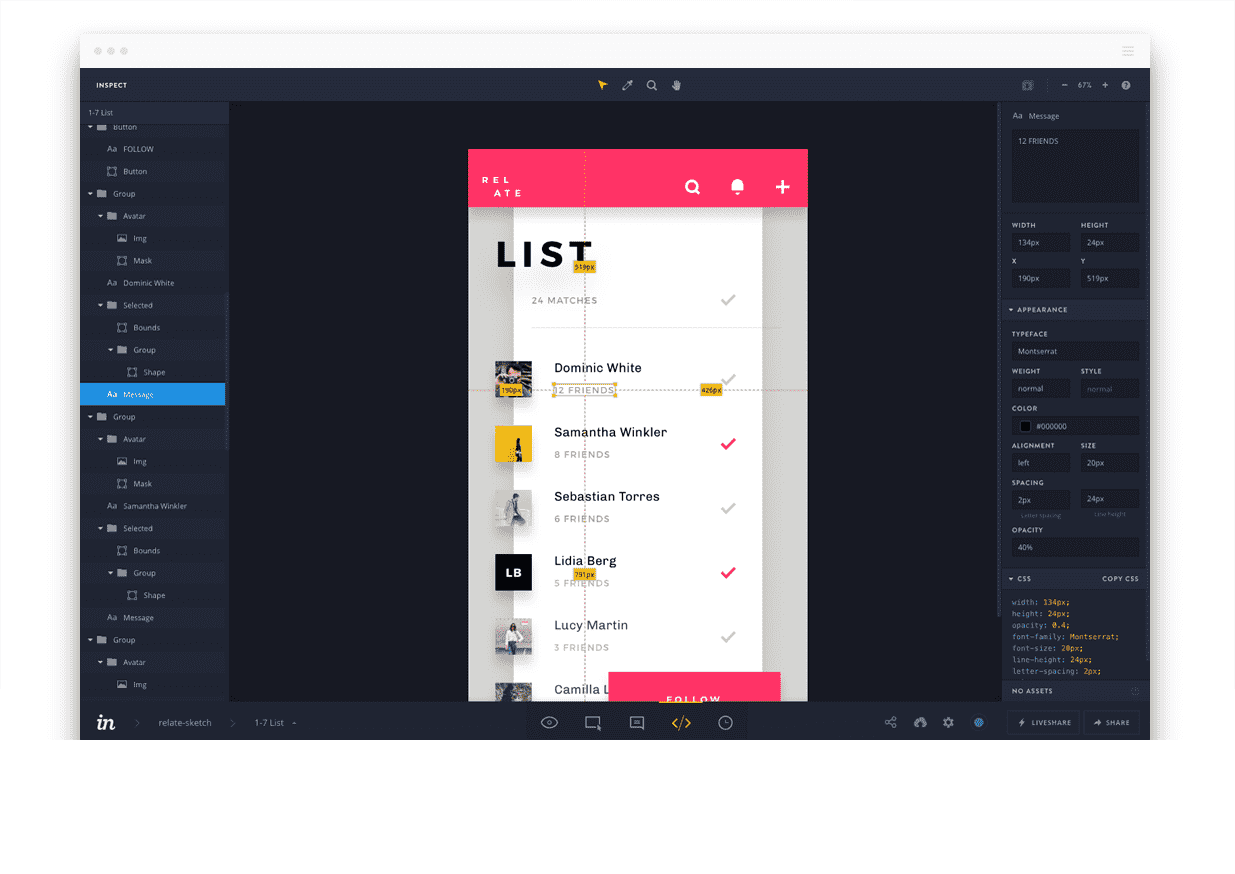 Invision has created a plugin called Craft that allows designers to automatically generate a styleguide based on all of the existing properties in their layout. The plugin will analyze all of the font properties and colors used in your various page layouts and generate a separate static styleguide for you. This can then be exported as a PDF / static styleguide and shared, or uploaded to Invision for review and for developer inspection.

I created a demo of the plugin in action which you can view below:

Craft is not the only game in town – zeroheight uses a Sketch or Photoshop plugin to generate a styleguide based on a layout as well. There are additional steps and control given to this tool, since zeroheight lets you create products with technical specs as parameters (such as the design and screen resolution). In this way, this solution is a combination of a local design plugin and an online management tool.

Unlike Craft, the designer has more control about what ends up in the layout to begin with – avoiding the scenario where every single color or font on the layout ends up in the styleguide that later has to be removed. Zeroheight will also allow designers to define entire component definitions, which make for a much more robust styleguide.

A risk I see with this approach is if a design changes but the styleguide is not synced, there’s no guarantee a developer is seeing the latest changes. Deciding on a proper workflow can help mitigate that risk.

zeroheight has other bells & whistles, such as JIRA and Slack integration, that can notify team members when the styleguide defintion is updated.

It’s unclear how much this service costs, but since it’s more than just a plugin, I am guessing there is a subscription model involved. The website provides no pricing model, no demo (I found a few on YouTube) and no trial version, so you don’t really know what you’re getting without having to go through a sales call and presentation. Likely, the people making the decision to purchase the product aren’t the people who are sussing out whether the tool works for them or not, which can require a lot of legwork for the team just to find out whether the tool is going to do what they want or not.

This is better than doing it entirely by hand if you’re using Sketch (and even moreso if your team is using Invision anyway), but the output result of Craft is not enough to be considered a complete styleguide, and there’s no real way to make it interactive.

zeroheight shows more promise, but without the ability to try the product out, you have to hope that that it does everything I think it does. I can’t make a strong recommendation for or against it at this point without knowing more or having some hands-on time with it.

David Hund was kind enough to compile an enormous list of code-driven generators, of which … there are many:

Without the luxury of going through each individual tool and testing it out, these are very cool for a few reasons – they can live in your existing code projects which means you are not creating these based on the prototype layout, but actually basing it on production code. The end result is an interactive styleguide based on code you’ve already written. Some of the tools will automatically generate the styleguide, meaning you can continue writing the code for your project and the styleguide gets continuously updated; others require more input from the developer.

A few examples and demos for some selected items are below:

Many of these tools have the same or similar functionality as their counterparts, and many of them won’t apply to your specific project based on the platform it is living on. That said, there are many to choose from for a variety of platforms – and additional research and trial & error is likely the only way to find the one with the right feature set for you.

While these are pretty slick and ultimately devs like me are easily impressed by any tool that “automagically” does something, the big unspoken issue here to me is that these tools cut out the designer from the process, and developers don’t just make up the styles from scratch in the development phase. Thus, these tools are not a replacement for a styleguide, since a designer is going to need something to even start the project – they are likely going to *still* need the designer to hand something off statically at the start.

So, that means these tools are likely a way to convert the styleguide from its initial form to a living form – but are not a replacement or the only styleguide to be created on the project.

Smashing Magazine has a nice, more in-depth review of some of these tools – though it’s a few years old – worth checking out if you are compelled to move in the generator direction.

We’ve already briefly talked about Invision, which is more of an online prototyping tool. It becomes more than just that when using the Craft plugin. However, there are also online services tailored specifically for generating styleguides, for a fee. Two additional examples are Frontify and Patternry; zeroheight would also fit into this category as outlined above.

The approach for Frontify is to allow users to upload or add specifications via WYSIWYG editor. This could be done before, during, or after high-fidelity design by a designer, and can easily be updated as code snippets become available by the developer. It appears to allow for a collaborative approach that could be integrated at various points along the phase of a project.

Frontify offers additional services, such as a media library for storing image assets, and what they call a Brand Portal, for entire brand identity suite. The product aims to be a central repository for any given brand or product’s guidelines, to be shared by designers, marketers, and developers alike.

If Frontify is trying to be everything to everyone, Patternry narrows its range of services and its target user. In Patternry, building a style guide requires a developer to write code that is hosted within Patternry. The target user for this product is a UI designer / developer – the product does not run off of drag-and-drop or WYWIWYG tools. The end result is more control.

The component definitions inside Patternry seem to depend upon production-ready CSS and JS to function, introducing some concern about keeping code in sync between your code repository and Patternry. This also limits the collaboration aspect, as a designer without code experience can’t dive in to make adjustments.

It’s clear that these types of services wish to make the creation of sharable and maintainable style guides quite easy, but also wants to hitch users into a subscription model where they are dependent upon them as part of their workflow. That may not be in your budget, and may be yet another thing to track (along with GitHub, JIRA, Basecamp, etc).

Some of the features are fairly robust, though, and the idea of not having to create any code from scratch is appealing. The feature set of Frontify seems pretty broad, so if your team can define a workflow that works for everyone, it may be a very useful suite of tools that act as a central repository for your style guides and brand standards. With Patternry, it seems to be more of a framework for an online styleguide than an actual generator or creator. That may be okay, but keep in mind that it’s likely going to introduce code disparity between your repository and styleguide. Using a code-based generator tool as described above may be more useful.

Frontify – covered above – used their own tool to generate their styleguide. Always nice to see a company pracitcing what they preach and using their own tools. I like how it mixes both visual definitions, when to use what, and provides code samples. They also categorize the sections into Design, Identity and Communication. Very thorough, but goes beyond a styleguide for a website and into the brand identity / pattern library for the entire product. View it here. 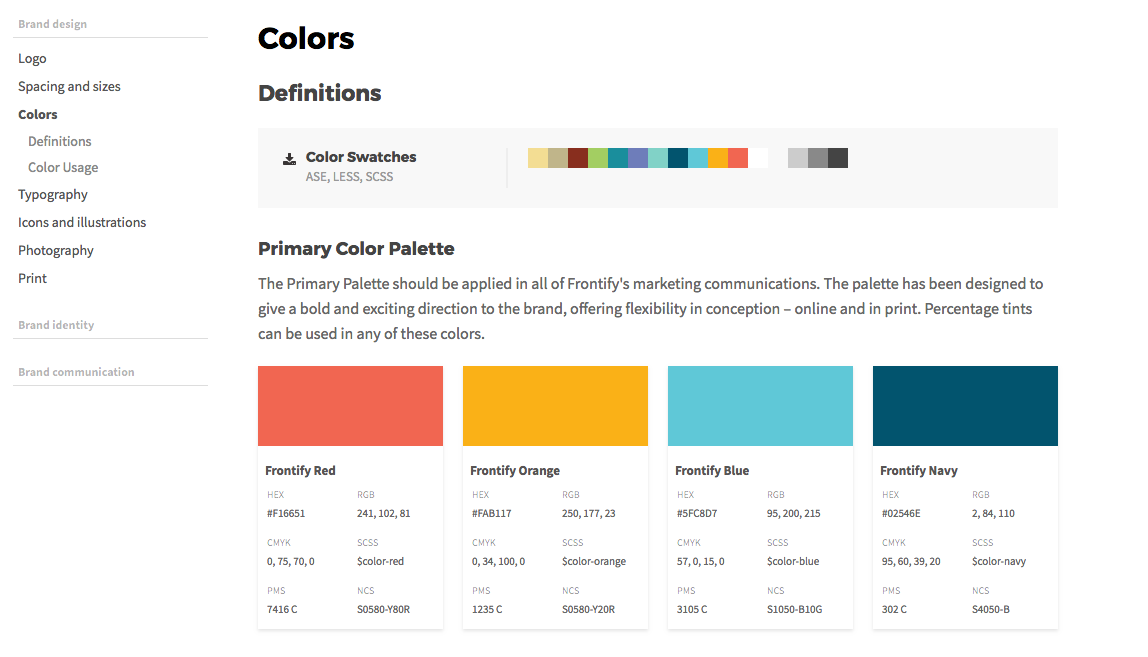 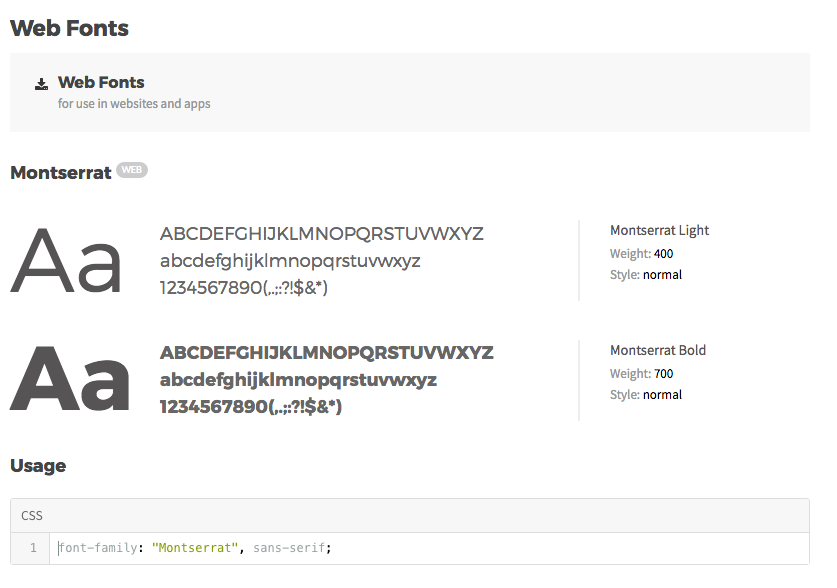 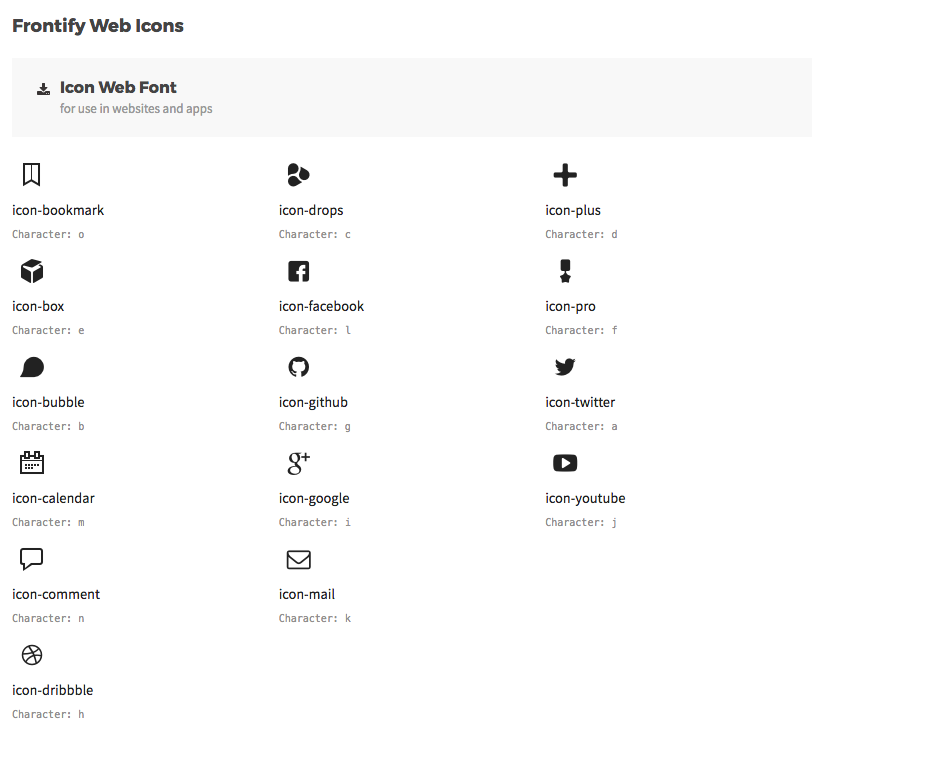 Yelp provides its styleguide online publically, which provides nice code-toggle ability. The visual layout of the styleguide is less engaging than the previous example, which is perhaps emphasises the utilitarian nature of it. View it here. 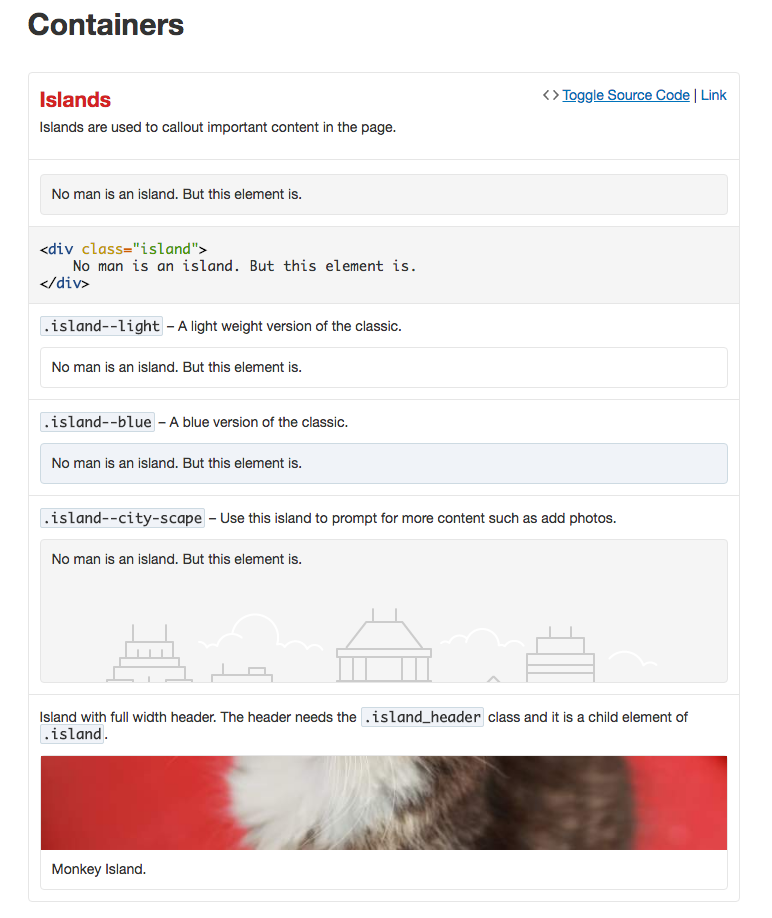 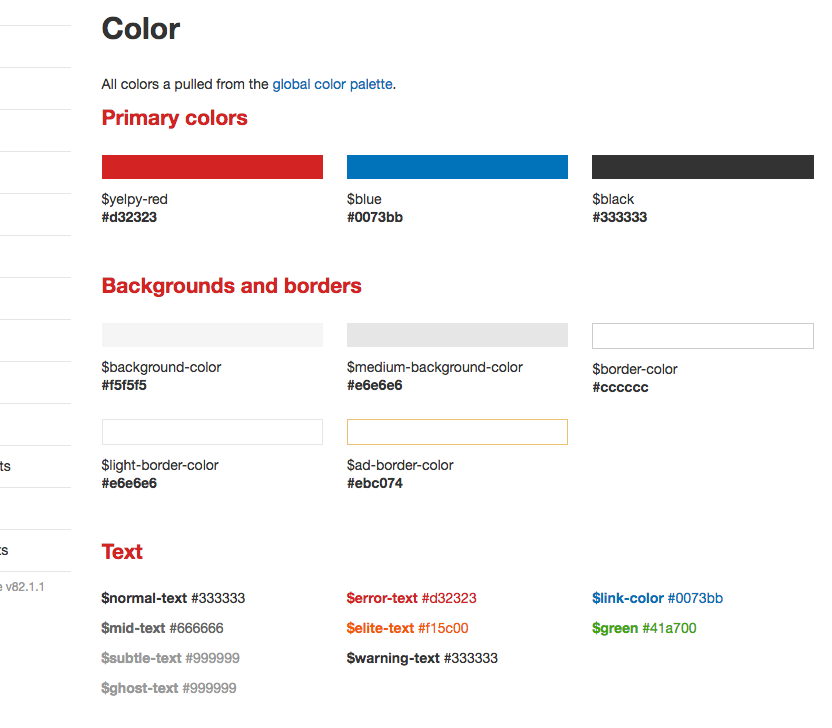 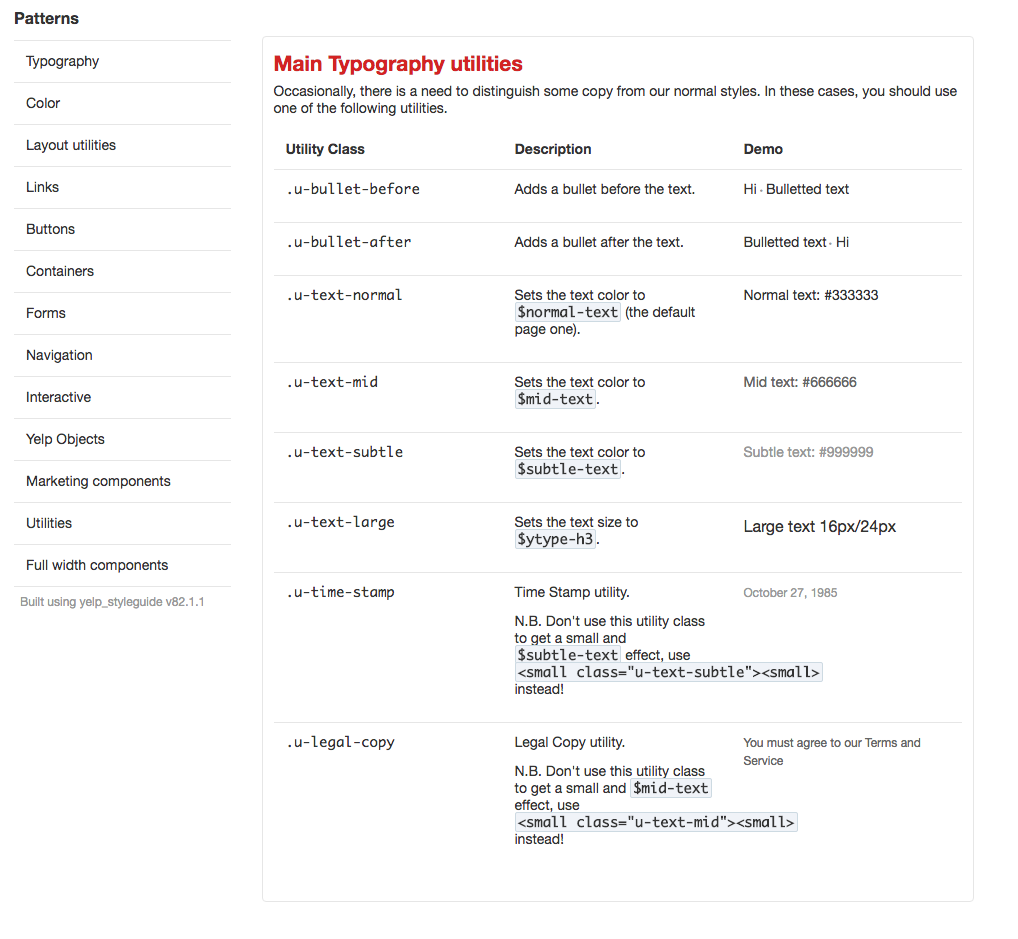 This is a styleguide that clearly took a lot of time to build. I like how this styleguide includes code samples for each component along with usage notes to remind authors how to utilize each component. I think their foundation area could use some more baseline code samples (typography, for example) but it possible that is baked into their global stylesheet, and developers would not have to touch it. View it here.

PageUp color – nicely designed color blobs, though users have to hover above them to view the hex value.

The takeaways here are that there will not likely be a single tool for solving the styleguide portion of the project. Nor should the responsibility of creating styleguide be assigned to only the designer or developer — it should be a collaborative process between technology and creative. We have found out that in some cases, two styleguides will need to be created – one static, perhaps for client approval and tech handoff; and one dynamic / interactive that will be the evergreen and living document to be referenced.

It’s also clear that everyone has their own definition of the right order of operations for creating styleguides. In my previous post, I had recommended starting with the styleguide, but also recognize that this workflow is not possible for everyone or for every project. Some of the tools outlined above will be more flexibile than others to fit your approval process and work style.

I would suggest that an important criteria for selection is the ability for the tool or methodology to be flexible enough to work with you, rather than one that forces you to change your workflow in order to use. Hopefully this post has given you a good overview on the types of methods available and the pros and cons of each.

From Idea to Output: Prompt Engineering is the Next Big Marketing Skill