My social media feeds are made up of 90% memes.

They’re usually posted by people I follow but every once in a while, a brand will post a meme and add their own spin on it. When it’s done right, those are the brands whose content I engage with the most.

What was once considered a trend reserved for Millennials and Gen Z has now evolved into an effective way for brands to engage with their audience.

Let’s talk about what meme marketing is, how you can leverage it, and see examples of brands getting it right.

What is meme marketing?

Meme marketing is the use of memes to promote your brand narrative. It’s a fun, low-effort way to connect with your audience and increase your engagement rate, as memes are highly shareable.

A quick background on memes – they’re concepts, behaviors, or ideas that spread on the internet. A meme can be any type of media format, including a GIF, video, text-post, or basic image. 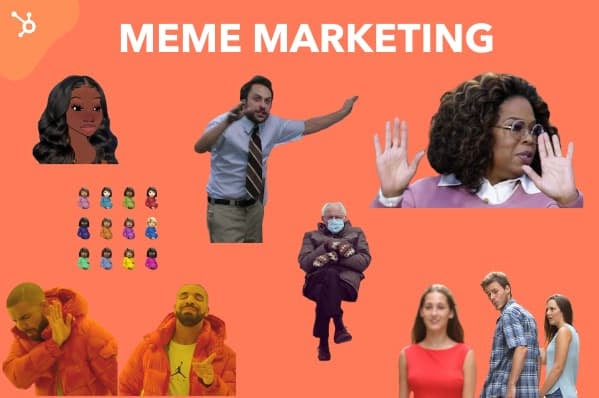 The truly successful memes spread like wildfire. That’s exactly why marketers want to leverage these already viral pieces of creative for their own marketing.

Another benefit to meme marketing is that it’s low effort. Most of the work has already been done: It’s being shared all over social media and it has a clear concept. All you have to do is fit the meme to your brand and hit “post.”

Now that we know the benefits of using meme marketing, let’s get to a few examples of brand memes in the wild. 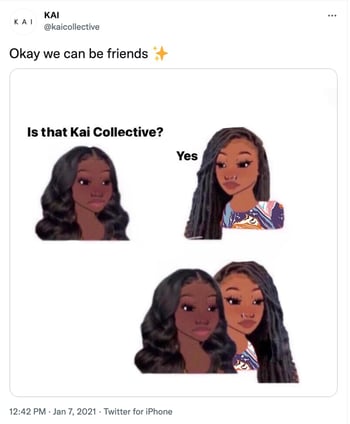 Black wojak memes started spreading on the interwebs in the fall of 2020. It wasn’t until December of the same year that it went viral, with users creating their own version of the hilarious meme.

Kai Collective was one of them.

The concept behind this particular meme– I say particular because there are multiple variations of this meme – is simple: One Black girl meets another Black girl, they bond over something and become friends.

Kai Collective made its own version of this meme to highlight its product, a print top. Instead of simply adding the text, they took it one step further by adding their clothing and making it a truly custom meme.

When rapper Drake released the cover for his “Certified Lover Boy” album, it instantly went viral.

The artist had accomplished his goal of creating a meme-able cover and the public took no time to create their own versions.

This perfume brand not only included its product in the meme but also labeled each one for even better recall.

It’s a great example of how to use a meme that is fun but also ties back to your brand. 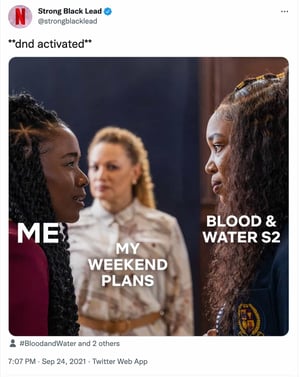 One thing Netflix’s social media team is great at? Creating their own memes.

The brand will often take the concept behind a popular meme and recreate it with their own image.

Netflix leverages its extensive media library to (re)create relevant, funny memes like the one above. 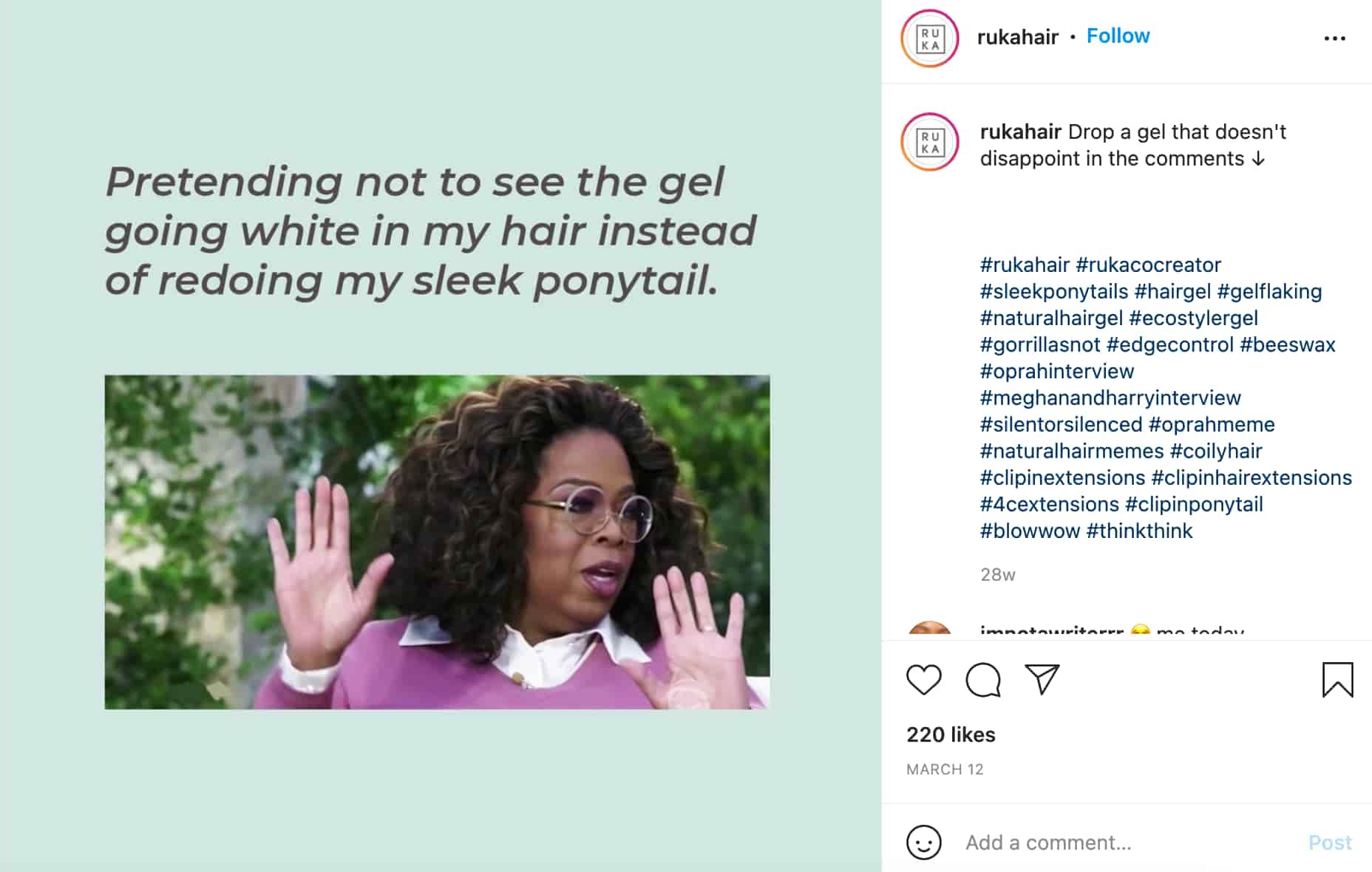 A meme list wouldn’t be complete without Oprah Winfrey.

This one came from from the highly viewed special “Oprah with Meghan and Harry.”

In addition to the iconic line – and quite possibly best follow-up interview question of all time – “Were you silent or were you silenced?” this image quickly made its rounds on social media.

It shows Winfrey raising her hands up in disapproval and looking away.

Haircare brand Ruka Hair created its own version of the meme to point out a major pain point for gel users.

Memes are so popular because they’re relatable. If your brand is brainstorming meme ideas, think of your user persona. What are some challenges they deal with? How are they approaching those challenges?

The rapper Drake has been the face of quite a few memes. That’s likely what inspired his latest album cover, as referenced above.

In actuality, this was taken from a music video the artist shot as he was dancing. But we’ll save the meme origin stories for another time.

Travel agency Diamond Express Travels uses the meme to highlight a pain point many travelers may have: The burden of planning and booking your own vacation.

Another thing to note is their logo addition.

Because of how shareable memes are, brands are encouraged to add their logo or name on a meme to ensure they remain top of mind when their post spreads.

I’ve seen this meme die down and come back to life many times over the past few years.

One look at the picture and you understand exactly what’s going on: The man featured in the middle is distracted by someone who walks past him while he is with someone else.

Hydrop.io, a water company based in India, created this meme to depict how its target audience views various types of water. And, they dive further into this idea in the caption by highlighting the benefits of alkaline water.

Sometimes, the meme speaks for itself. In this case, you can use it to supplement a message you want to share to your audience. 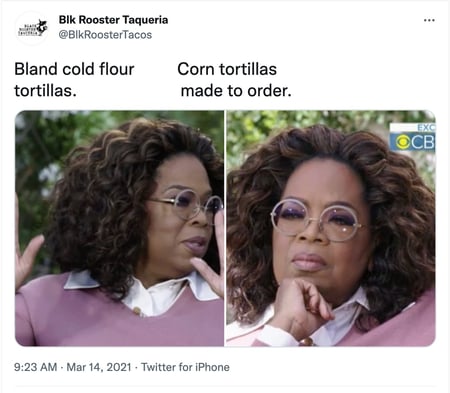 Here’s another example of how the interview that attracted 17.1 million viewers resulted in multiple memes for our enjoyment.

In this case, Mexican restaurant Black Rooster Taqueria took a simple approach to share its value proposition: Why deal with bland, cold flour tortillas when you could get fresh, authentic corn tortillas?

If you’re just discovering this brand, this meme tells us a little bit about them while garnering a quick laugh. 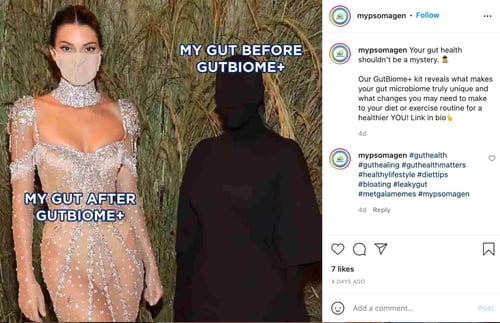 The Met Gala is the unofficial meme generator.

Every year, you can expect to see dozens of memes created from celebrity looks at this star-studded event.

This one features sisters Kendall Jenner and Kim Kardashian and works in multiple contexts, before-and-afters, light and darkness, positives and negatives.

When done right, a meme should get your audience laughing and interested in engaging with your brand. 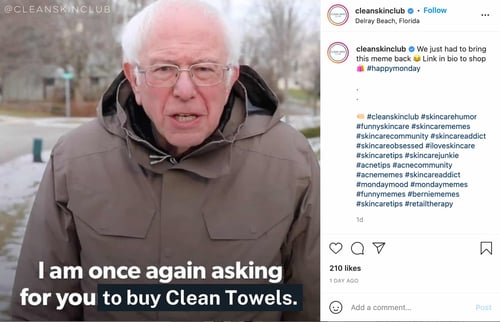 Another popular figure in memes is none other than politician Bernie Sanders.

When he’s not floating around the internet for seeming completely unenthused at the 2020 presidential inauguration,

I’m not quite sure what caused this meme to go viral, but once it did, everyone was changing the end of this sentence to match their own demands.

For brands, it works as a fun way to speak directly to your audience and ask them to take a particular action. 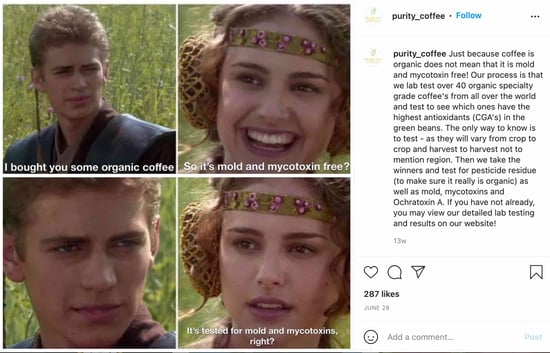 Memes can emerge from just about any image, no matter how old or high-quality it is. If one social media user creates something funny from it, it has the potential to spread and be used worldwide.

This meme came from the 2002 Star Wars film, “Episode II – Attack of the Clones.”

It shows a conversation between two people as one says something that brings happiness and excitement to the other. That is until they realize it may not be so great after all.

Coffee brand Purity Coffee not only educates its audience on an issue they may not be aware of but also boosts its own value in the process.

As shown in this example, memes offer a great opportunity to highlight issues that your brand helps resolve or address. 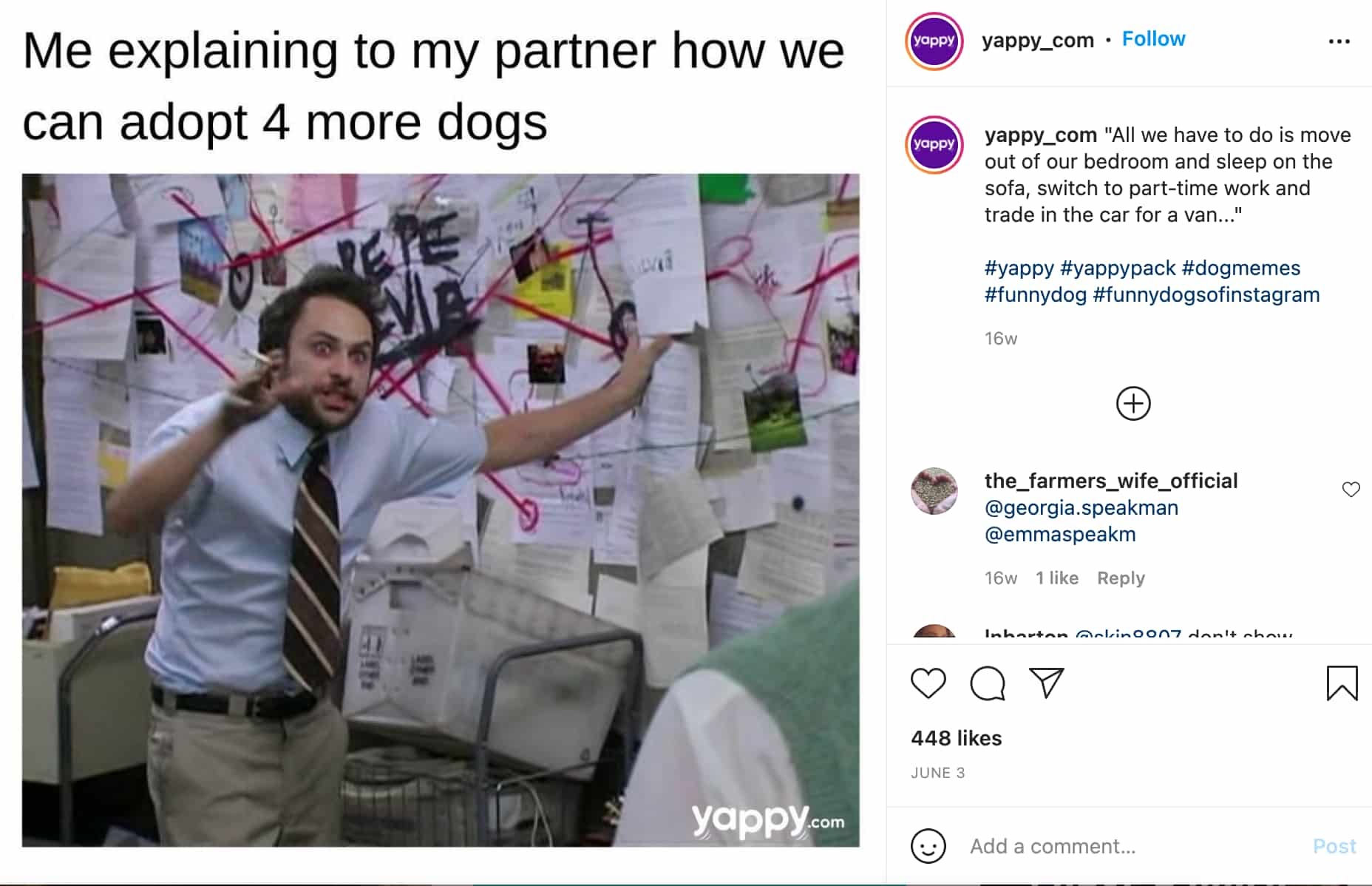 This meme is an oldie but a goodie.

From solving cliffhangers from TV dramas to developing conspiracy theories, this meme works in many different contexts.

In this example, pet store brand Yappy pokes fun at its core audience, likely animal lovers who have a constant desire to adopt pets.

When you know and understand your user persona, you can create memes that really resonate with your audience, leading to higher engagement rates.

If you can’t find a meme that fits your brand, make one. That’s exactly what luxury purse brand Telfar did.

They took two still frames from the 2004 movie, “White Chicks,” and replaced part of the original line with its own.

It fits perfectly in this case and is a great example of how to leverage existing media for your own use. 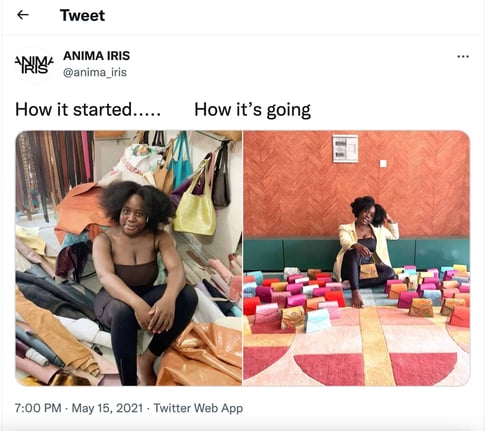 The phrase, “How It Started…How It’s Going” took over Twitter for the better part of 2020.

The great thing about it is that it ages pretty well, unlike most memes which have a short shelf life. It’s a trend that brands can take part in to share their origin story.

Luxury purse brand Anima Iris shared pictures of its CEO in the early stages of the brand to where it is today.

This type of trend allows your brand to connect with your audience and invite users to learn more about you.

Meme marketing is a surefire way to build community and potentially grow your brand awareness. With this in mind, you want to make sure you’re doing it right.

As with any marketing strategy, you want to make sure your meme feels authentic to your brand. The thing with trends is that everyone wants to jump on and make sure they don’t miss the train.

The thing is, not every viral meme will be a good fit for your brand. Be selective about which memes you create and which ones you let go of.

On that same note, make sure your meme isn’t offensive.

Brands can get themselves in hot water when they join in on the meme fun without thinking through the implications. Here are a few questions to ask before you join in. Does the meme:

If you answer “yes” to any of these questions, you may want to reconsider its use.

There’s nothing worse than a meme done wrong.

It’s like when parents use teenage slang in the wrong context, it’s cringy and makes you stand out like a sore thumb.

Here are the guidelines to keep in mind:

4. Strike while the iron is hot.

Ideally, you want to share your meme as it peaks, not when it’s already made its rounds.

Because once interest has died down, you may not get the traction you want from your audience.

Whenever it makes sense for your brand, use meme marketing. It’s a simple but creative way to share your brand narrative while engaging your audience.

In the business world, there are many forms of marketing that companies can implement to …